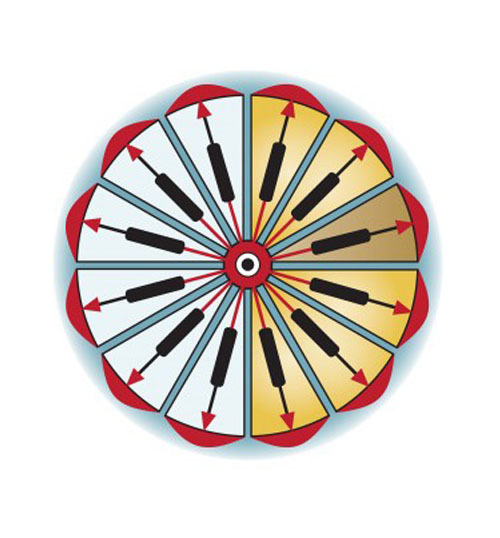 The Wyandot of Anderdon Nation, sits within the Wendat Confederacy, which consists of The Huron Wendat Nation, in Québec, Canada, The Wyandot of Anderdon Nation, The Wyandot Nation of Kansas and the Wyandotte Nation in Oklahoma.
The Six Points Village Project Master Plan has been developed with the assistance of the University of Michigan’s School of Natural Resources and Environment and encompasses land conservation and protection; protection of historically significant cultural spaces and a site that is relevant to our community and the surrounding communities.
The Six Points Village project brings forward awareness of ecology, archeology, history, Indigenous issues, biodiversity
and cultural anthropology. Six Points is a 15-acre, culturally and historically significant parcel of land in Gibraltar Michigan. Within this parcel,  7 1/2 acres are considered uplands, or “buildable” on which will be the site of our planned Longhouses and other buildings. These will be featured as community, ceremonial spaces for members and separate visitors spaces. The remaining acreage encompasses wetlands which is where our beloved Turtle pond is located. We hope that the building of the traditional Wyandot Longhouses, Museum, Visitors Center and other features, will help us to teach our non-Indigenous guests about our history and our contemporary organization. This land also contains a sacred Ancestral space, which is the most
significant reason for choosing this location. We honour our Ancestors!
Six Points was the village of the Wyandot Chief Tahounehawieties, whose settler name, was Adam Brown. Adam Brown is the great, great, great great, Grandfather of Chief Billy Friend, of the Wyandotte Nationin Oklahoma. The neighbouring township of Brownstown, was named after him. The Wyandotte Nation has been very supportive of this project and
we thank them most heartily!
This land was lost to us over 200 years ago, but our ties to it have never been broken. Our Nation has proudly regained this land and is reclaiming our heritage in hopes of educating our children and grand children, and making our presence known to the world.
We’ll be sharing details of our development in the near future!
Stay tuned please!
twelve petalled clan and phratry pattern.©rzs 2017- digital rendering: tammaro